Some things make everyone cringe.  This is one of those things.  A band from the UK called The Rocking Horse Club released a song and a video called “Straight White Man” … and it’s just as unwatchable as you would expect.

The band, ironically full of straight (maybe) white men looking like something right out of a vegan cookbook photoshoot for the oppression olympics, clearly wanted to grand stand and show everyone how good straight white men have it, and how things would be if these straight white men had to deal with the day to day struggles of oppressed people.  The video depicts a white man (who actually didn’t look very manly or straight at all) walking around and experiencing life as an oppressed person might. Getting Cat-called, sexually harassed at work … blah blah blah, you name it.   The YouTube community responded appropriately by rating the video with 9,295 dislikes to a whopping 385 likes.

There is hope for the human race after all.  Thank god for people on the internet seeking out these outrageous videos and showing these insufferable idiots that nobody likes their virtue signaling.  Nobody is reaching out to these fools and applauding them for their courageous music video.  Nobody likes this shit.  They did it for the clicks and they got them… and they ruined any credibility they had as a band, and they deserve every bit of backlash they get for this nonsense.

Lets play a quick round of .. ‘what if we changed the race’… Imagine the outrage and cries of racism and bigotry if a band put out a song called “gay black men” and did nothing but shit all over an entire race and sexual orientation of a group of people… would they be propped up by the left?  Or called bigots and racists?  Why do I even bother asking?  Just watch for yourself and feel free to leave a thumbs up if you like it!  Or a thumbs down, like 99% of people, have done already.

If you needed any reassurance as to what people actually think of the video, you don’t have to look any further than the comment section, where The Rocking Horse Club is getting roasted to the high heavens.  Here are a few of the top comments. 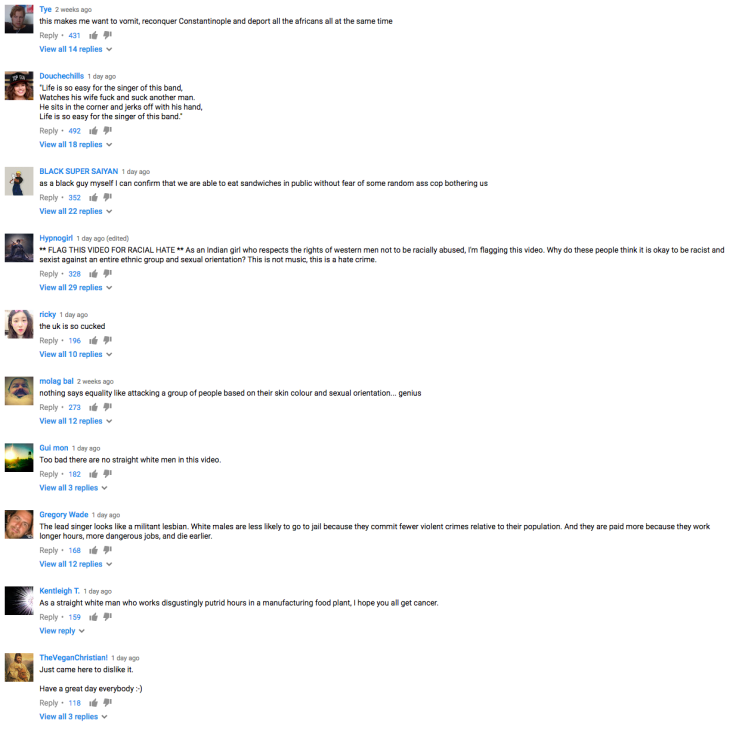 Gavin McInnes of Rebel Media did a fantastic video where he broke this music video down scene by scene and exposed just how wrong they are about every single scene they portray in the video.  The funniest part of all is that Gavin’s response to their video already has more views than the actual music video and his like / dislike ration is 2500+ likes to 29 dislikes.  Check out Gavin’s response to their garbage music video below.